We have just completed a study that inventories Arctic land ice loss since 1971. It is available open-access in the current issue of Environmental Research Letters1. While we scientists have a pretty good idea of the health — or mass balance — of glaciers and ice sheets — or land ice — since the advent of satellite altimetry in the early 1990s, there is a need for better understanding of land ice health during the pre-satellite era. Our new study estimates the annual ice loss from all glacierized regions north of 55°N between 1971 and 2017.

We use in situ data – mass balance measurements from a handful of continuously monitored glaciers – as indicators for the health of land ice in seven Arctic regions. These hard-fought in situ data are scarce, they are only measured at between 20 and 44 Arctic glaciers every year. Extrapolating these data to entire regions is statistically challenging without additional information. Fortunately, independent estimates of regional mass balance are available from satellite gravimetry during the 2003 to 2015 period. This permits calibrating in situ and satellite-derived mass balance estimates during the satellite era. This makes our pre-satellite era estimates fairly robust.

The UN Intergovernmental Panel on Climate Change (IPCC) now highlights two periods – the “recent past” (1986-2005) and “present day” (2005-2015) – as being of special interest in climate change studies. The Arctic land ice contribution to sea-level rise that we inventory increased from 0.4 to 1.1 mm sea-level equivalent between these periods. In terms of tonnes per second (5,000 to 14,000 t/s), both the magnitude – and the increase – are staggering. 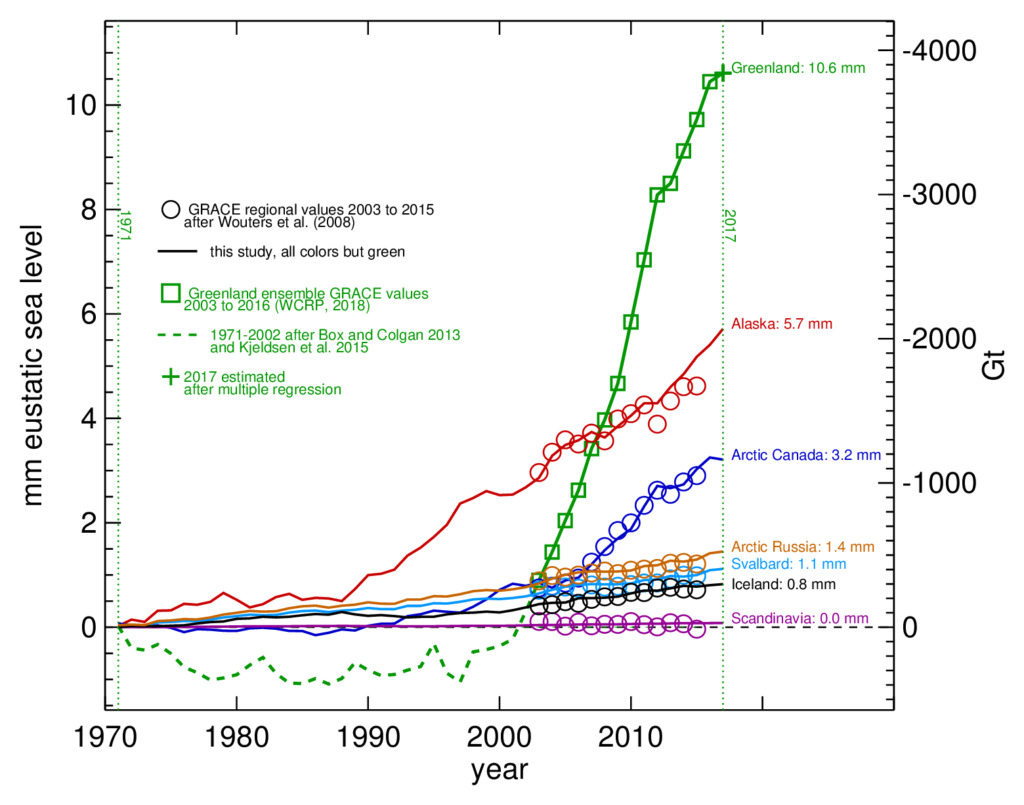 Figure 1 – The cumulative sea-level rise contribution (in mm) from land ice in seven regions of the Arctic between 1971 and 2017. Analogous estimates from satellite gravimetry (GRACE) between 2003 and 2015 shown with open symbols.

The uncertainties associated with extrapolating sparse in situ data over large areas are undeniably large. But, the reality is that climate change was already gearing up as the global satellite observation network came online. So, in the absence of satellite data that can characterize the “pre-climate change” health of Arctic land ice, we need to leverage the extremely precious pre-satellite era observations that are available in creative ways. We hope that the ice loss estimates we present will be useful comparison targets for studies that estimate pre-satellite era mass balance in other ways.

The estimates of annual land ice mass balance — or health — in seven Arctic regions produced by this study are freely available for download here. This study was developed within the Arctic Monitoring and Assessment Program (AMAP) and International Arctic Science Committee (IASC) frameworks, as a direct contribution to the IPCC Special Report on the Ocean and Cryosphere in a Changing Climate (SROCC). 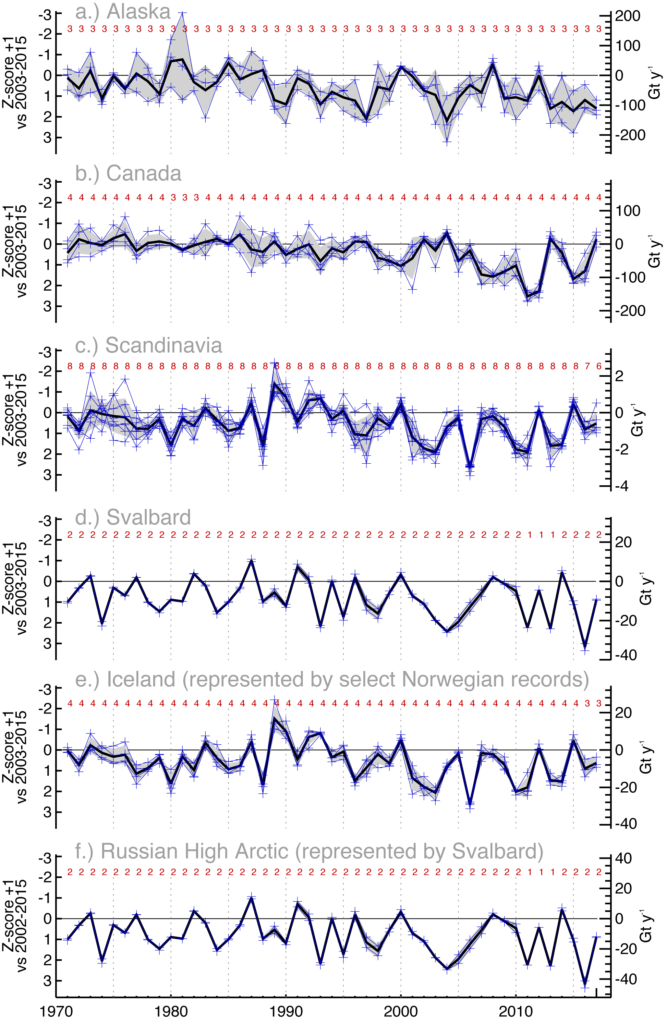 Figure 2 – Annual land ice mass balance — or health — in six Arctic regions between 1971 and 2017. Individual glacier mass balance records (blue lines) are combined into a regional composite (black line). Health is expressed both as a normalized score (left axis) and in gigatonnes per year (right axis). The numbers of glaciers comprising each composite is indicated in red text.

In collaboration with Virginia Eichhorn of the Tom Thomson Art Gallery, I am hoping to get a very interdisciplinary arts and sciences project underway that looks at the impact of recent and projected climate change on the Canadian landscapes painted by the Group of Seven. The exceptionally vivid expressionist landscape scenes painted by the Group of Seven between 1920 and 1935 have become Canadian cultural icons. The temperature and precipitation trends associated with climate change, however, are changing these landscapes, most visibly through changes in vegetation, snow and glacier extent, lake or sea ice extent, and flood or drought frequency (Figure 1). We intend to reframe Group of Seven paintings as unique time capsules of a vanishing Canada, rather than portraits of an intransient Canada. 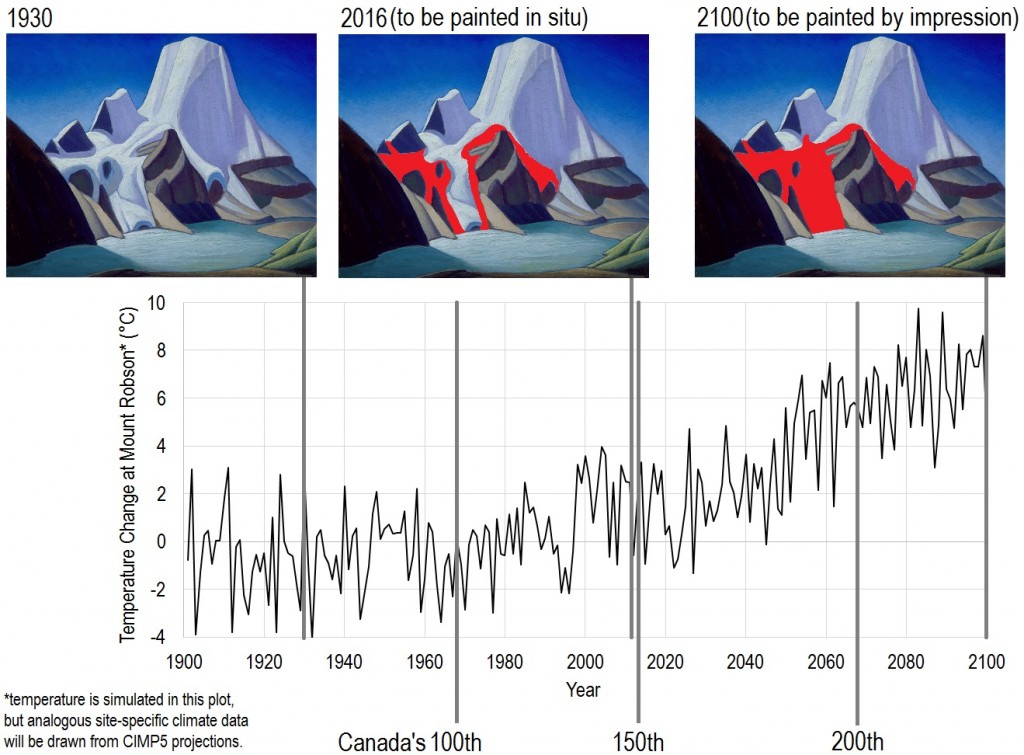 To do this, we are seeking to dispatch contemporary emerging artists across Canada, to landscapes featured in Group of Seven works, to re-paint impressions of these landscapes under one of three IPCC Representative Concentration Pathways (RCPs). These RCPS, ranging from RCP 4.5 to RCP 8.5, essentially range from “optimistic” to “pessimistic” CO2emissions reductions scenarios. For example, RCP 4.5 simulates 4.5 W/m2 increased radiative forcing in year 2100 relative to year 1850, while RCP 8.5 simulates 8.5 W/m2, or almost twice as much, anomalous radiative forcing associated with well-mixed greenhouse gases from anthropogenic sources. 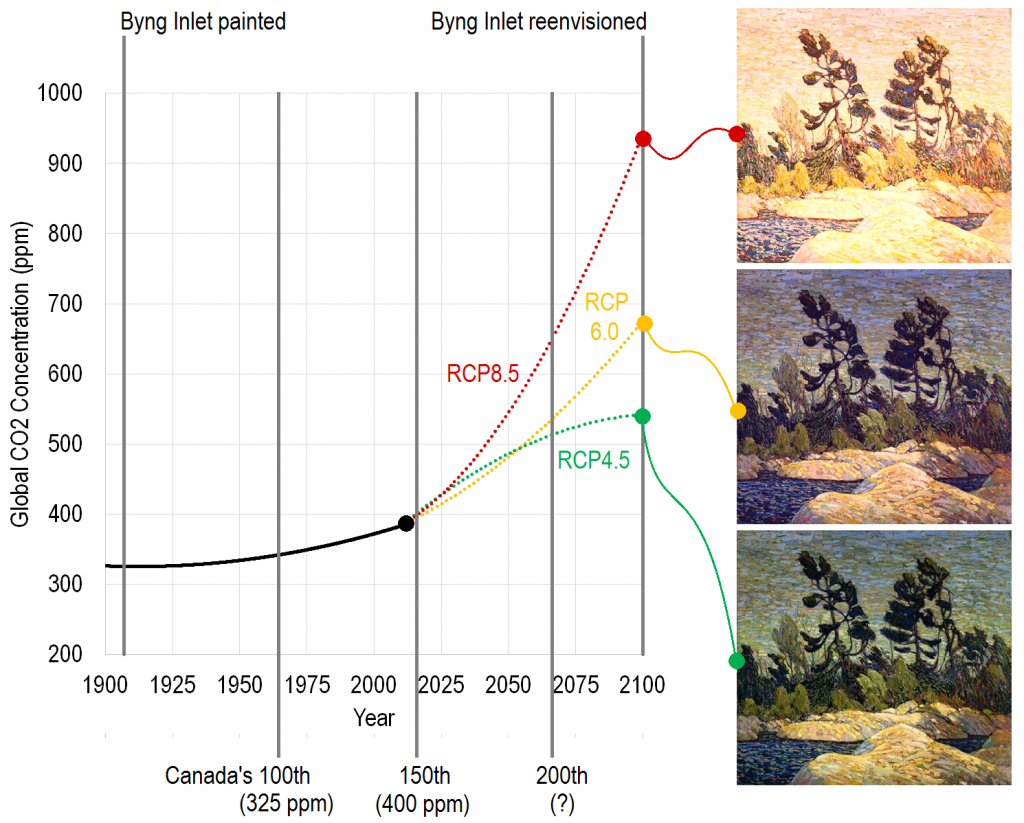 Figure 2 – Envisioning a landscape in 2100 under three IPCC scenarios that vary from the “optimism” of RCP 4.5 to the “pessimism” of RCP 8.5. Byng Inlet was originally painted by Tom Thomson c. 1920.

We are ultimately aiming for a cross-disciplinary arts and sciences exhibition that will place specific Group of Seven landscapes, and more broadly Canada’s landscape, in the context of ongoing climate change in a highly visual fashion. Inspired by ArtTracks150, we are hoping that Canada’s 150th birthday (July 2017) may provide a natural window of increased public awareness of centurial time-scales, during which we might briefly focus public attention on the multi-generational implications of climate change on the Canadian landscape. Virginia and I welcome you to contact us for more information on, and ways to get involved with, this project.

We have a new study in this month’s Remote Sensing of Environment, which examines satellite-derived glacier mass balance in Greenland and the Canadian Arctic1. Satellites are generally used to assess glacier mass balance through changes in volume (via satellite altimetry) or changes in mass (via satellite gravimetry). While satellite altimetry observes volume changes at relatively high spatial resolution, it necessitates the forward modeling of firn processes to convert volume changes into mass changes. Conversely, the cryosphere-attributed mass changes observed by satellite gravimetry, while very accurate in absolute terms, have relatively low spatial resolution. In this study, we sought to combine the complementary strengths of both approaches. Using an iterative inversion process that was essentially sequential guess-and-check with a supercomputer, we refined gravimetry-derived observations of cryosphere-attributed mass changes to the relatively high spatial resolution of altimetry-derived volume changes. This gave us a 26 km spatial resolution mass balance field across Greenland and the Canadian Arctic that was simultaneously consistent with: (1) glacier and ice-sheet extent derived from optical imagery, (2) cryospheric-attributed mass trends derived from gravimetry, and (3) ice surface elevation changes derived from altimetry. We have made digital versions of this product available in the supplementary material associated with the publication.

To make sure our inferred mass balance field was reasonable, we evaluated it against all in situ point mass balance observations we could find. Statistically, the validation was great, yielding an RMSE of 15 cm/a between the inversion product and in situ measurements. Practically, however, this apparent agreement largely stems from the fact that we could only find forty in situ point mass balance observations against which to compare. Evaluating our area-aggregated sector-scale mass balance estimates against all previously published sector-scale estimates provides a more meaningful validation. This suggests the magnitude and spatial distribution of inferred mass balance is reasonable, but highlights that the community needs more in situ point observations of mass balance, especially from peripheral glaciers and regions of high dynamic drawdown in Greenland. (For the glaciology hardcores I will note that “mass balance” is distinct from “surface mass balance”, in that the former measurement also includes the ice dynamic portion of mass change.) 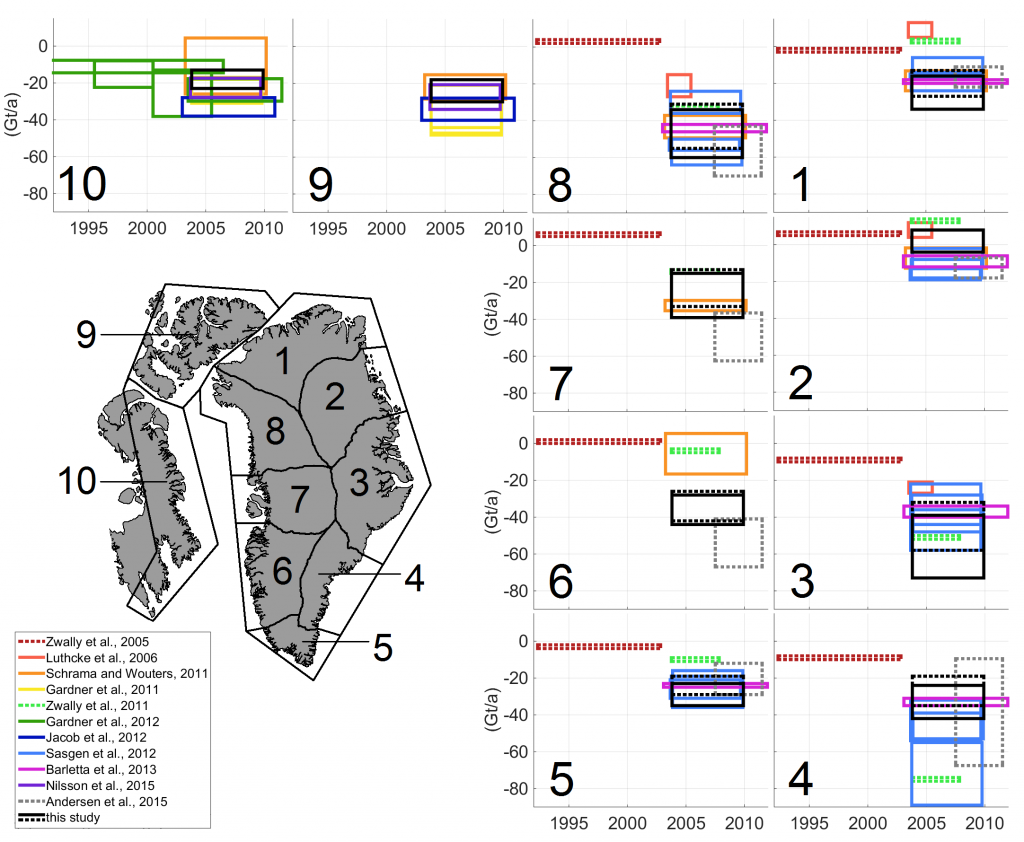 This new inversion mass balance product, which we are calling “HIGA” (Hybrid glacier Inventory, Gravimetry and Altimetry), suggests that between 2003 to 2009 Greenland lost 292 ± 78 Gt/yr of ice and the Canadian Arctic lost  42 ± 11 Gt/yr of ice. While the majority of Greenland’s ice loss was associated with the ice sheet proper (212 ± 67 Gt/yr), peripheral glaciers and ice caps, which comprise < 5 % of Greenland’s ice-covered area, produced ~ 15 % of Greenland mass loss (38 ± 11 Gt/yr). A good reminder that ice loss from “Greenland” is not synonymous with ice loss from the “Greenland ice sheet”. Differencing our tri-constrained mass balance product from a simulated surface mass balance field allowed us to assess the ice dynamic component of mass balance (technically termed the “horizontal divergence of ice flux”). This residual ice dynamic field infers flux divergence (or submergent ice flow) in the ice sheet accumulation area and at tidewater margins, and flux convergence (or emergent ice flow) in land-terminating ablation areas. This is consistent with continuum mechanics theory, and really highlights the difference in ice dynamics between the ice sheet’s east and west margins.

As with some scientific publications, this one has a bit of a backstory. In this case, we submitted a preliminary version of the study to The Cryosphere in December 2013. After undergoing three rounds of review at The Cryosphere, the first one of which is archived in perpetuity here, it was rejected, primarily for insufficient treatment of the uncertainty associated with firn compaction. Coincidentally, on the same day I received The Cryosphere rejection letter, I received a letter from the European Space Agency (ESA) granting funding for a follow-up study. A mixed day on email indeed! After substantial retooling, including a discussion section dedicated to firn compaction and the most conservative error bounds conceivable, we were happy to see this GRACE-ICESat study funded by NASA and the Danish Council for Independent Research appear in Remote Sensing of Environment. The editors at both journals, however, were very helpful in moving us forward. Our ESA-funded GRACE-CryoSat product development is now ongoing, but a sneak peek is below.