We have a new study in the current issue of The Cryosphere that looks at the surface energy budget at a site on the Greenland Ice Sheet, and particularly the energy available for meltwater production, over a five-year period spanning the 2010 and 2012 exceptional melt years1. While both the summers of 2010 and 2012 were exceptionally warm, only 2012 resulted in a negative mass balance. In fact, 2012 was the first year since records began that there was more meltwater runoff than snowfall at the site (KAN_U at 1840 m elevation in Southwest Greenland).

In the study we describe how the 2010 exceptional melt year appears to have preconditioned the near-surface layers of the ice sheet to dramatically strengthen the melt-albedo feedback in the subsequent 2012 exceptional melt year. Essentially, we suggest that near-surface ice lenses created by refreezing meltwater in the 2010 melt season made the ice sheet surface transition more readily from relatively high albedo light snow to relatively low albedo dark ice in the 2012 melt season. The substantially darker 2012 ice sheet surface absorbed more solar energy, and therefore caused more melt per ray of sunshine, than in 2010. We estimate that this melt-albedo feedback resulted in approximately 58 % more solar energy absorbed, and available for melt, in 2012 than in 2010.

While 2010 and 2012 were exceptional melt seasons in the context of the past thirty years, they are likely to have foreshadowed the upcoming thirty years. As Greenland climate is now rapidly warming, summer melt intensity no longer oscillates around its long term mean, and instead previously exceptional events are becoming normal. We therefore speculate that under persistent climate change, the firn at the KAN_U site will likely become saturated with refrozen ice lenses, which will enhance the melt-albedo feedback and perhaps even inhibit the downward percolation of meltwater. Ultimately, this will accelerate the transition of the contemporary lower accumulation area underlain by firn into an ablation area underlain by superimposed ice.

Maintaining the relatively sensitive automatic weather station needed to accurately measure surface energy fluxes in the relatively harsh ice sheet environment was no easy task. It took a number of scientists and funding agencies, which are listed in the acknowledgement section of the paper, to make this study possible. The KAN_U weather station continues to report real-time climate data via the Programme for Monitoring of the Greenland Ice Sheet (PROMICE) data portal: www.promice.dk. 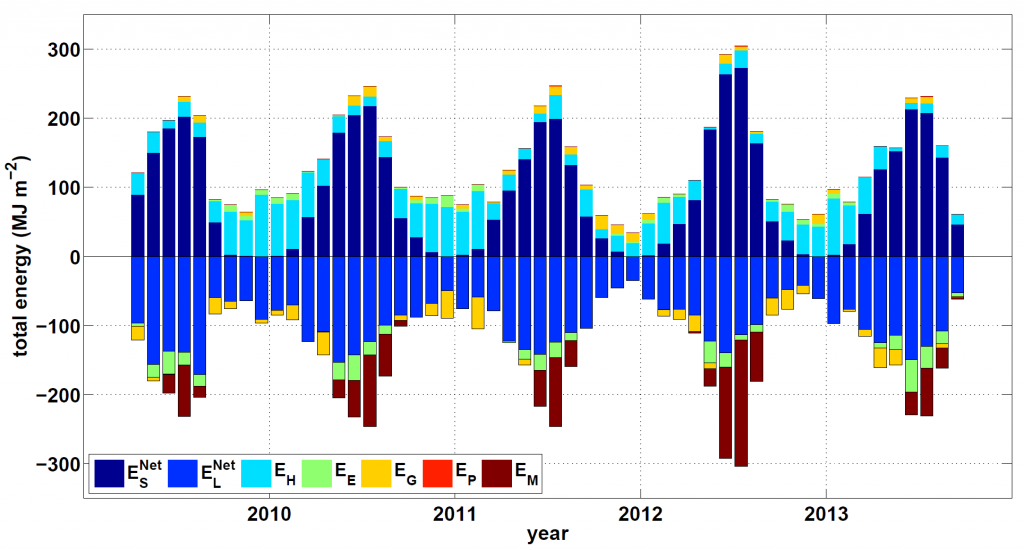