We have a new open-access study in the current issue of Journal of Glaciology that investigates the “cold content” of Greenland’s high-elevation firn plateau1. Firn is the relatively low density near-surface ice-sheet layer comprised of snow being compressed into ice. Cold content is one of its quirkier properties. Of course, all firn is literally freezing – meaning below 0°C – but some firn is colder than other firn. Clearly, it takes a lot more energy to warm -30°C firn to 0°C, than it does for -1°C firn. Our study highlights at least one discernible shift in cold content – how much sensible heat energy is required to warm firn to the 0°C melting point – in response to climate change. 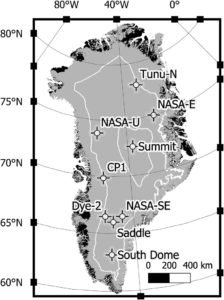 Figure 1 – The nine high-elevation ice-sheet sites where we assessed firn cold content in the top 20 m. 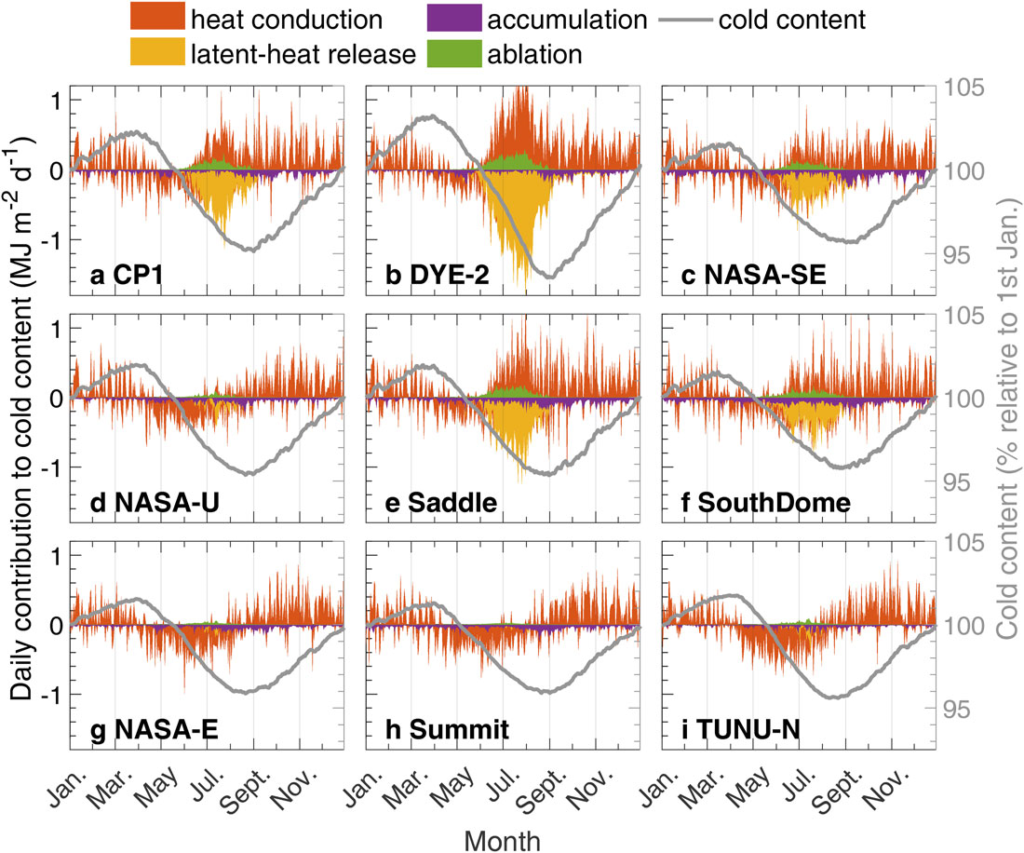 Figure 2 – The mean annual cycle in four-component firn cold content assessed at the nine ice-sheet sites over the 1988-2017 period. Note the relatively large latent heat release associated with meltwater at Dye-2, in comparison to other sites.

We find few discernible year-on-year trends in cold content across the highest elevation areas of the firn plateau. For example, there is perhaps a slight decrease at Summit – where we find snowfall is increasing at 24 mm/decade and air temperatures are warming at 0.29°C/decade – but statistically-significant multi-annual trends in cold content are difficult to separate from year-to-year variability. At Dye-2, however, which has the greatest melt rate of the sites that we examine, there is clear evidence of the impact of changing climate. At Dye-2, an exceptional 1-month melt event in 2012 removed ~24% of the cold content in the top 20 m of firn. It took five years for cold content to recover to the pre-2012 level. 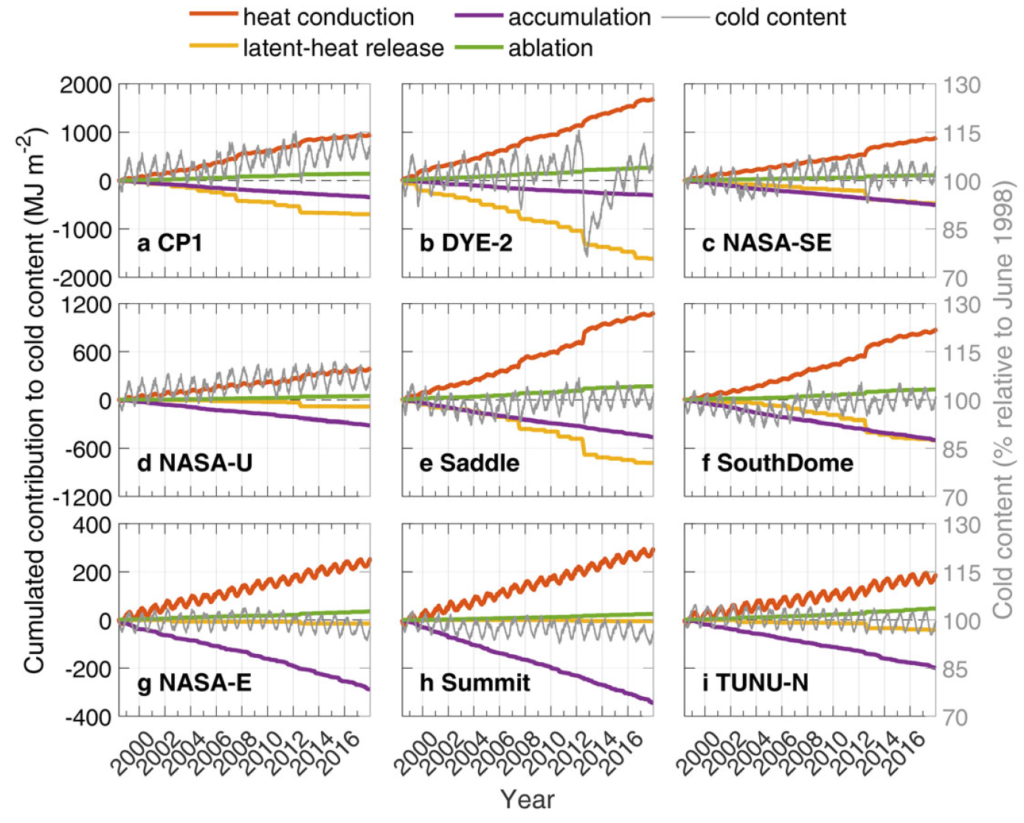 Figure 3 – The cumulative four-component firn cold content at the nine ice-sheet sites over the 1998-2017 period. Note the sharp loss of Dye-2 cold content in 2012, and the subsequent multi-year recovery of this cold content.

The refreezing of meltwater within firn is a potential buffer against the contribution of ice-sheet melt to sea-level rise; surface melt can refreeze within porous firn instead of running off into the ocean. But refreezing meltwater requires available firn cold content. The multi-annual reset of cold content that we document at Dye-2 suggests that a single melt event can reduce firn cold content – and thus precondition firn for potentially less meltwater refreezing – for years to follow. This highlights the potential for the cold content of Greenland’s firn plateau to decrease in a non-linear fashion, as climate change pushes melt events to progressively higher elevations of the firn plateau.

We have just completed a study that assesses indicators of Arctic change since 1971. It is available open-access in the current issue of Environmental Research Letters. We assimilate nine hyper-diverse data types – air temperature, permafrost temperature, precipitation, river discharge, tundra greenness, wildfire area, snowcover duration and, of course, sea ice area and land ice loss – into standardized indices. The motivation of this study is to bring together almost a five-decade time-series of biophysical variables into a common open-data framework. 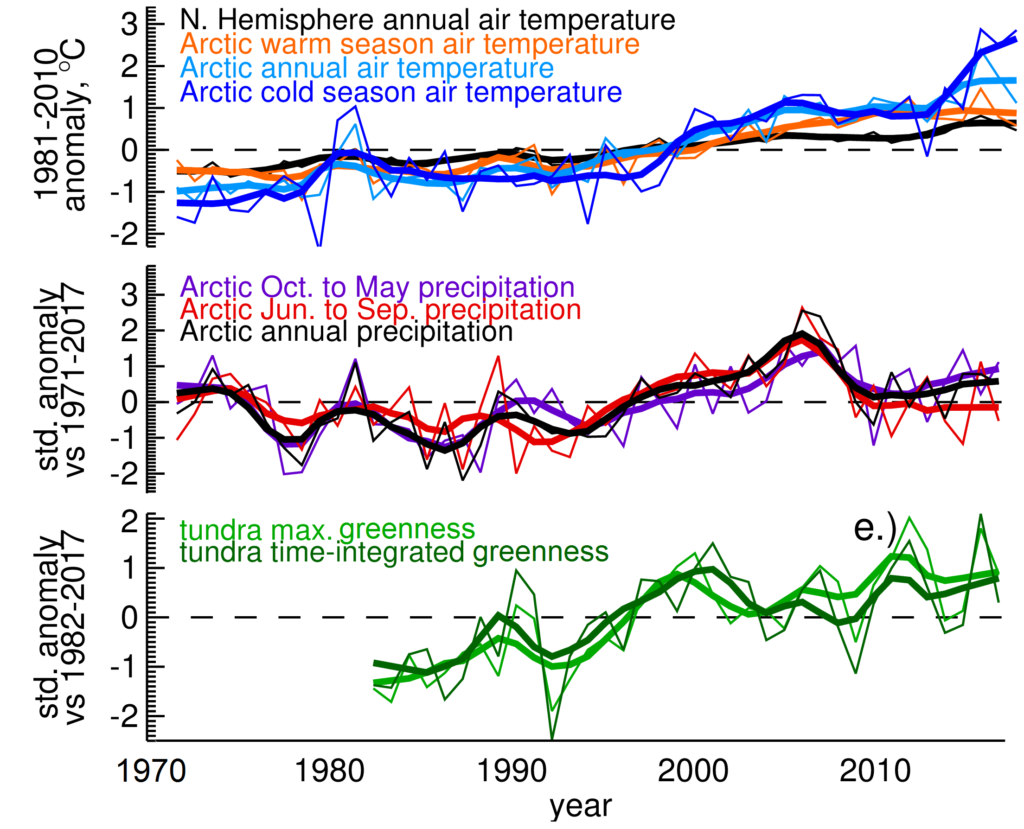 Figure 1 – Three of the nine types of Arctic indicators compiled in this study over the 1971-2017 period. These three biophysical indicators show that Arctic tundra is becoming greener in response to increasing Arctic temperature and precipitation.

If there is one climate variable to rule them all, it is air temperature. Increasing air temperature leads to an intensification of the hydrologic cycle, which is clearly evident as increases precipitation and river discharge. Increasing temperature also drives increasing land ice loss and decreasing fall sea ice area. Beyond just the physical climate system, changing air temperature is also driving changes in the biological ecosystem. There is a startlingly clear – more than 99.9 % certain – correspondence between air temperature and the greenness of Arctic-wide tundra. This means a warmer Arctic is a greener Arctic.

In addition to assessing the nine types of indicators, we also discuss some of the tremendous number of knock-on effects of these biophysical trends. These knock-on, or biophysical cascade, effects include decreased alignment of flowering and pollinating windows for plant; increased prevalence of wildfire ignition conditions; an acceleration of the CO2 cycle with increased uptake during growing season counterbalanced by increased emissions in spring and fall; conversion between terrestrial and aquatic ecosystems; and shifting animal distribution and demographics. The Arctic biophysical system is now clearly trending away from its 20th Century state and into an unprecedented state, with biophysical implications not only within but beyond the Arctic.

This study was developed within the Arctic Monitoring and Assessment Program (AMAP), with the ambition that high-level Arctic summary statistics are of interest to the forthcoming IPCC Sixth Assessment Report (AR6). Annual time-series of the nine types of Arctic indicators compiled for this study will soon be freely available for download at www.amap.no. For now, you can access them via this GoogleSheet.

We are starting a new two-year project to design, build and deploy a new type of ice-drill to measure temperatures at the ice-bed interface of the Greenland Ice Sheet. Why? Because we are unsure whether the bed is frozen or thawed beneath about one third of the ice sheet. As the rate at which ice flows is dependent on ice temperature – and basal ice temperature in particular – this translates into uncertainty in simulations of how ice sheet form and flow will evolve over time.

We suspect that climate change is likely driving an expansion of the thawed-bedded portion of the ice sheet — eroding the frozen-bedded portion — over time. But in the last sixty years, direct temperature measurements of the ice-bed interface have only been made at six inland ice-sheet locations. These scarce, but tremendously valuable, basal ice temperatures have been measured at the sites of ice core deep-drilling projects. These deep-drilling projects take months or even years to create a 30 cm wide borehole to the ice-sheet bed from which to retrieve delicate ice core. 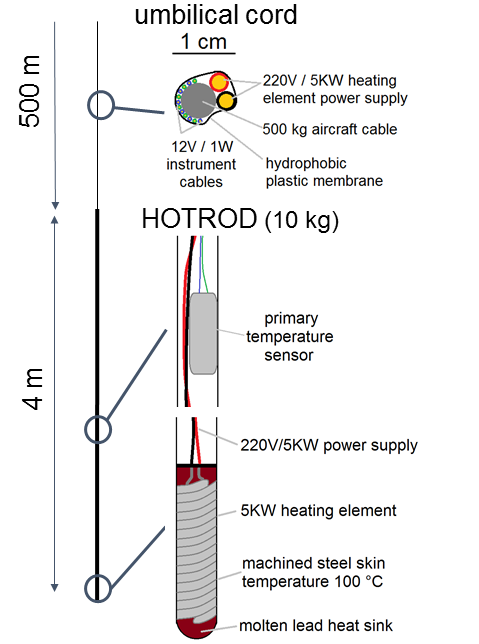 This project will design, build and deploy a drill for rapid sampling of ice-sheet basal temperatures. HOTROD will use an approximately 5KW electric melt-tip to open 3 cm wide access boreholes to depths of 500 m within days. The HOTROD umbilical cord will not only power the melt-tip, but also have embedded temperature sensors that — with the melt-tip — make a one-way trip to the ice-sheet bed. The heart of the melt-tip will be recently designed heating elements intended for rapid heating of energy-efficient domestic hot water supplies.

In 1971, thermal drilling was used to recover the top 372 m of ice core at Dye-3. The Dye-3 deep ice core was subsequently completed to 2037 m with electro-mechanical drilling in 1981. Thermal drilling technology was last used in Greenland in 1974, to recover a 403 m ice core at Crete, Greenland1. While there’s been numerous hot-water drilling projects since then, the working memory of thermal drilling is fading. The goal of this project is to successfully deploy a melt-tip thermal drill to measure a 500 m deep ice-sheet temperature profile with less than ten days of drilling. Initial field-testing activities will begin in 2019. 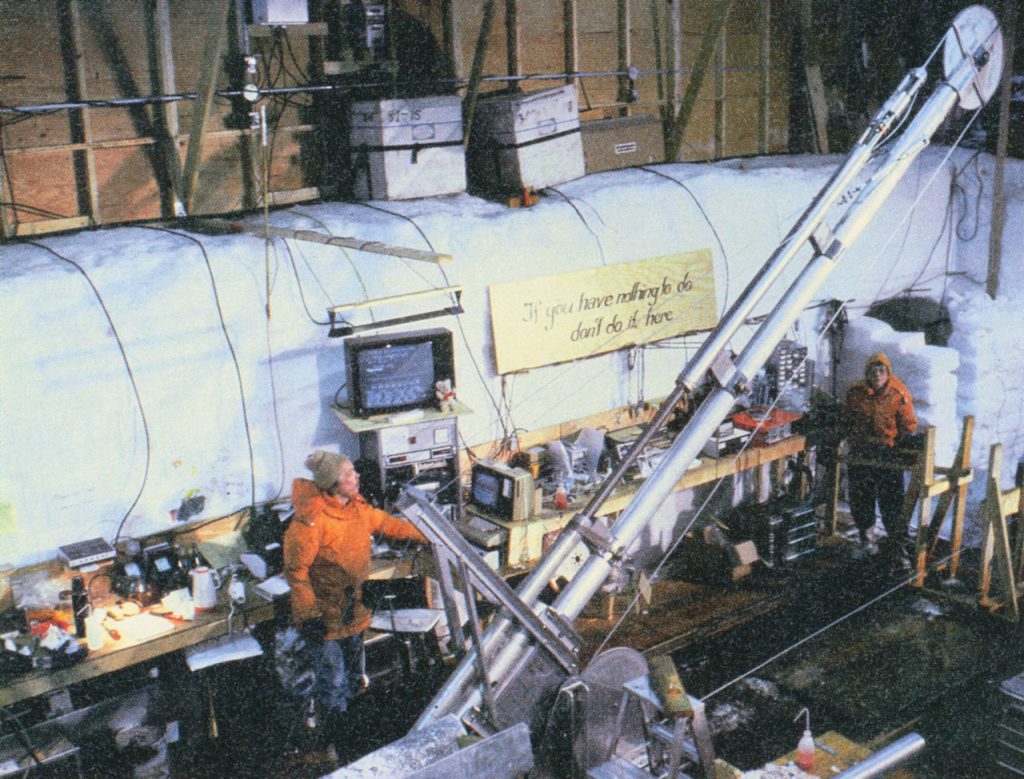 We hope that the advent of rapid melt-tip drilling will be a disruptive technology within the sphere of ice-sheet research now dominated by conventional electro-mechanical and hot-water drilling systems. A concerted effort to sample more temperatures at the ice-bed interface may potentially shift our understanding of ice-sheet basal temperatures and even ice-sheet sensitivity to climate change. This project is funded by Villum Experiment, a programme of Villum Foundation that funds science and engineering projects that challenge the norm and have the potential to transform traditional approaches2.

I'm delighted to announce a new project that will develop an instrument to measure deep ice-temperatures within the Greenland Ice Sheet!

Posted by William Colgan on May 19, 2016
Climate Change, New Research / No Comments

We have a new open-access study in the current volume of Annals of Glaciology that tracks the fate of meltwater in the relatively porous near-surface firn of the Greenland Ice Sheet using temperature sensors1 (available here). One of the main goals of this study was to understand what fraction of the meltwater produced at the ice sheet surface percolates vertically into the firn and locally refreezes, rather than leaving the ice sheet as runoff and contributing to sea level rise. The total retention capacity of all of Greenland’s firn could be a non-trivial buffer against sea level rise2.

For this particular study, we deployed firn temperature sensors at depths of up to 15 m at KAN_U. The sensors were automated to record data throughout the year, between our spring sites visits. KAN_U is located at 1840 m elevation in Southwest Greenland in the lower accumulation area. While KAN_U traditionally receives more mass from snowfall than it loses from melt, our study focused on the “extreme” 2012 melt season, which was the first year since records began that there was more meltwater runoff than snowfall at the site. 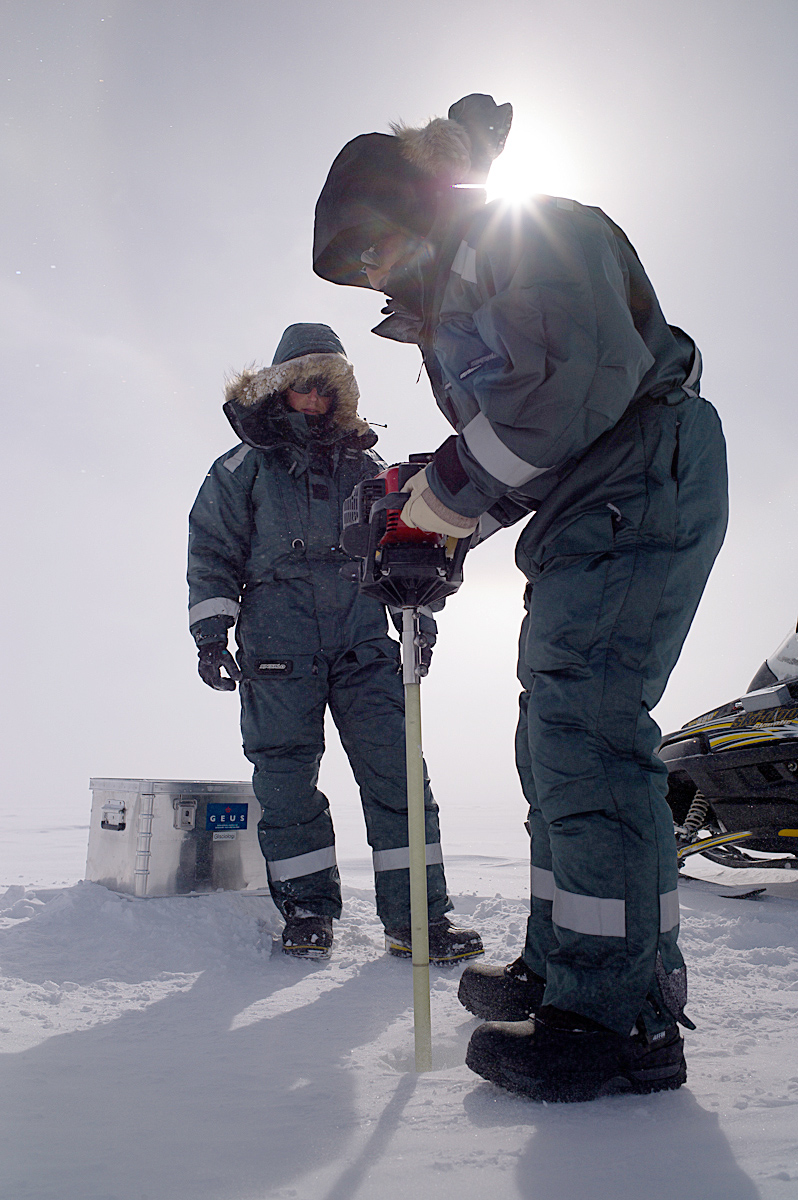 Figure 1 – Lead author Charalampos Charalampidis drilling a borehole on the Greenland Ice Sheet near KAN_U during the 2013 spring field campaign. 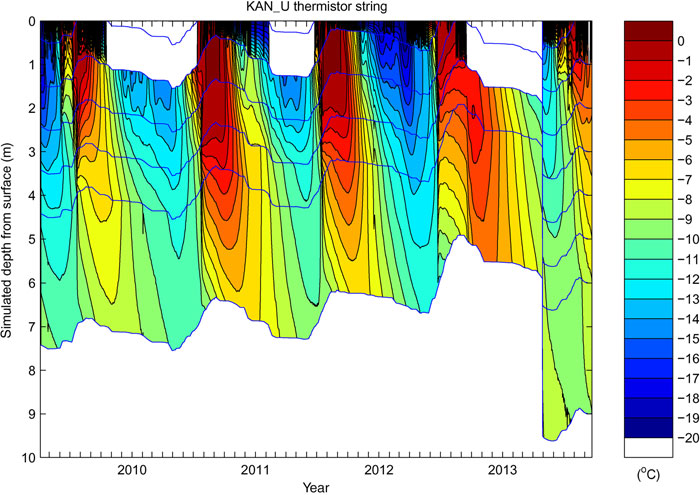 Maintaining the relatively sensitive automatic weather station needed to accurately measure firn temperatures and surface energy fluxes in the relatively harsh ice sheet environment was no easy task. It took a number of scientists and funding agencies, which are listed in the acknowledgement section of the paper, to make this study possible. The KAN_U weather station continues to report real-time climate data via the Programme for Monitoring of the Greenland Ice Sheet (PROMICE) data portal: www.promice.dk.